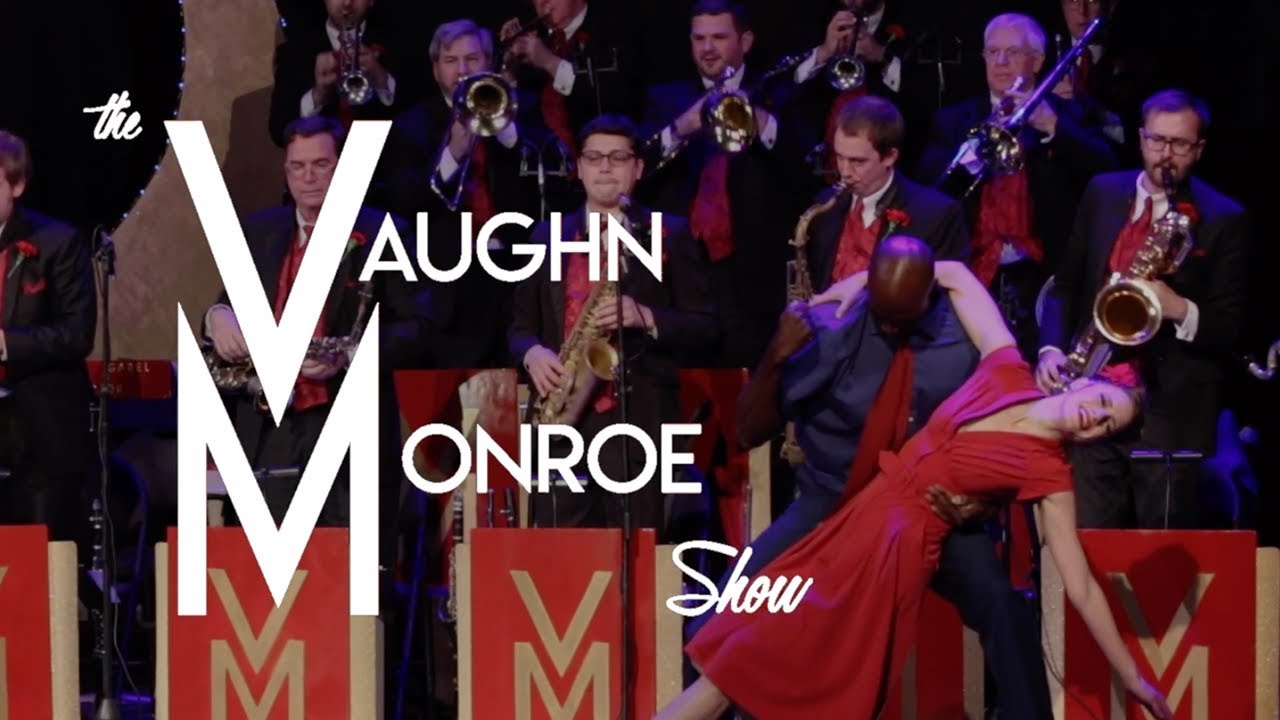 Prepare to Be Captivated by Vaughn Monroe’s Classics

The Vaughn Monroe Orchestra, Dan Gabel and the Moon Maids and the VMO dancers perform: "You Were Meant For Me" Composed by Nacio Herb Brown, this was Vaughn and Marian Monroe's wedding song. The arrangement is by Bill Stegmeyer for the album "There I Sing/Swing it Again" on RCA Victor.

What is the Vaughn Monroe Show

It was 1968, and famous big band leader Vaughn Monroe decided to put down his baton, retreat from the rigors of touring, and move from his Boston home to retire with his wife in Florida. He donated his entire arrangement library to the New England Conservatory, his alma mater. In 2012, big band leader Dan Gabel entered NEC as a master’s student, and discovered the collection, untouched for forty-four years, languishing in an old archival room in the basement of Jordan Hall. While always a fan of Monroe, sorting through these original charts really sparked Gabel’s interest in Monroe’s music and personal history.  Gabel presented his Masters Recital on the music of Vaughn Monroe, and Monroe’s two daughters and their families came to the show. This was the beginning of a wonderful friendship with the Monroe family, and after spending time with Candy and Christy, Gabel’s idea for the new Vaughn Monroe Orchestra was born.

Gabel knew that this couldn’t just be another “ghost band” or tribute group. It had to be an entire show, including the big band, vocal group, dancers, comedian, and ads from the original Camel Caravan radio and TV programs. Since Monroe was so successful at so many styles and mediums, the new show had to reflect at least part of his incredible career. After countless hours of research, interviews, collecting memorabilia, and musical analysis, Dan Gabel has recreated a night in 1949, bringing the music of Vaughn Monroe back to life. Gabel has begun writing the first-ever biography of the legendary bandleader, as well as sketches for a stage musical Racing with the Moon, the story of Monroe told through the fascinating perspective of his loving wife, Marian.

So now, for the first time since the library went into the archives in 1968, we present: The Vaughn Monroe Show

Who Was Vaughn Monroe

Bandleader Dan Gabel is working on a forthcoming biography of Monroe. Expect updates in the fall of 2018!

One of the most popular entertainers for over four decades, Vaughn Monroe had a multi-faceted career. Though a classically-trained baritone vocalist, Monroe started his career as a lead trumpet players and trombonist on the road in the 1930s.

With help from Boston’s Jack Marshard, Monroe formed his own band in 1940 centered around his inimitable voice. Big Band historian George T. Simon notes, Monroe “was a press agent’s dream. Seldom has any band come up so quickly...the girls loved him and the boys wanted to be him.” Monroe used that fame to entertain troops during WWII, earning him the moniker “the voice that won the war.”

During the post-war boom, Monroe sold millions of hit records and opened his own club The Meadows just outside Boston. Monroe married his high school sweetheart Marian who, in addition to being the mother of their two children, served as business manager of the band and The Meadows.

The New England-based band quickly became a national sensation, and was heard coast-to-coast in popular weekly “Camel Caravan” radio shows. Soon thereafter, Monroe created one of the first TV programs “The Vaughn Monroe Show,” which later became the first program to broadcast in color. On the stage, Vaughn Monroe starred in several Broadway musicals including Annie Get Your Gun. Heading to Hollywood, Monroe also became a movie star in several Westerns as one of the first “singing cowboys.” Performing his own stunts on a horse, he was later featured as a guest star on TV shows such as Bonanza.

Vaughn Monroe composed many popular songs (including his famous theme Racing with the Moon) and jingles (RCA Factory Service), and acted as the spokesman for RCA. Despite all of the fame, Vaughn Monroe was a home-loving type who would fly his own airplane home most nights to spend time with his family. He gave up the band and moved with Marian to Sewall’s Point, Florida. Unfortunately, his retirement was cut short when he passed away suddenly due to complications from emergency surgery in May, 1973.

One lost opportunity– he turned down the chance to be the first to record Rudolph the Red-Nosed Reindeer. Gene Autry ended up with that one, but perhaps Vaughn evened the score when Vaughn’s arrangement of Ghost

Riders surpassed the one that Autry had done earlier.)

Monroe's first few years of recording had been quite successful, but all his biggest hits were yet to come. During 1945, "There! I've Said It Again" and "Let It Snow! Let It Snow! Let It Snow!" both spent more than a month at the top of the charts. And his two biggest hits, "Ballerina" and "Riders in the Sky," came in 1947 and 1949, respectively. The latter, an old Western chestnut, brought Monroe into Hollywood's singing-cowboy genre with a couple of early-'50s movies, including "Singing Guns" and "The Toughest Man in Arizona." RCA capitalized on Monroe's continuing appeal, by signing him to a lucrative deal as its corporate spokesman, "The Voice of RCA Victor," in a long series of TV and print ads, and he continued to perform into the early '70s. The band's jobs always included appearances at Monroe's successful nightclub and restaurant, "The Meadows", located on Route 9 in Framingham, MA.

Like most big bands of the 1940s, a number of well-known artists got their start with Vaughn Monroe. Ray Conniff, guitar legend Bucky Pizzarelli, songstress Georgia Gibbs, and Boston saxophone master Andy Bagni all performed with the orchestra. Although most of the big bands broke up after the 1947 musician's union strike, Monroe went on to record his biggest hit in 1949: Ghost Riders In the Sky. From 1940 to 1954, Monroe had close to 70 chart records, including many #1 hits. Three of those songs, Let It Snow, Ghost Riders and Ballerina, rank among the all-time top #1 songs, each dominating the Billboard charts for 10 weeks or more.

Monroe is a man of many hobbies. He likes photography, motorcycling, miniature trains, carpentry, swimming, golf, and especially flying. His earnings are large enough to permit him to be an active flying enthusiast and he owns two planes– Cantina II and Cantina III (named from first three and last four letters of his daughters' names). On dates played within three hundred miles of New York, Vaughn is able to fly home for a visit on his day off. That's a pretty good record for a man who directs RCA Victor's top-selling recording band, plays a hundred one-nighters a year, usually fifteen weeks of theater dates, a dozen other week engagements at night clubs and the like, and is on the air every Saturday night for Camel cigarettes.

Who is Dan Gabel

Hailed by the Boston Globe as “the real deal, a bandleader that looks and sounds just like the 1940s,” Dan Gabel has been passionate about big band music his entire life. Realizing a childhood dream, Gabel formed his first band at age 13. Now the leader of several groups including Dan Gabel and The Abletones (authentic 18-piece Big Band), The High Society Orchestra (Hot Jazz of the Roaring 20s), and others, Dan Gabel and his various bands have appeared at: the Montreal Jazz Festival, the Newport Mansions, Museum of American Armor (Long Island), the Mechanized WWII Weekend (New Hampshire), played for Governors, dignitaries, dance competitions, musicals, and various concert venues throughout the country. Dan Gabel has toured internationally with the Glenn Miller Orchestra, as well as with the Tommy Dorsey, Hal McIntyre, and Cab Calloway Orchestras. His arrangements and compositions have been featured by ensembles all over the world. He also serves as President and CEO of the American Big Band Preservation Society, Inc., a 501(c)3 non-profit organization dedicated to “preserving, promoting, and performing big band music, and keeping music in schools.” He is a graduate from the University of Massachusetts Amherst (B.A. Political Science, History, and BDIC/Jazz), and New England Conservatory (Masters of Music in Trombone).
And, in the words of Monroe’s daughter, Christy Monroe Smith, “Dan Gabel is uniquely qualified to present the music of my father...he has the right approach and all the talent in a similar way that Daddy led his band.”

“Wow...Dan not only captured the authentic sound of my father’s band, but also the essence of the entire era, from the Moon Maids, dancers, and perfect addition of vocalist Elise Roth. I am so proud that Dan has seen fit to honor and recreate my father’s signature voice and sound of his band.”

“Dan’s passion for Vaughn’s music is so exciting for my sister and I. It warms my heart that he is keeping my father’s music and legacy alive for a new generation to enjoy.”

“Dan Gabel has brought back the [1940s] experience with a first-rate stage show, clearly orchestrated with love and a lasting respect for Mr. Monroe and his music. What a thrill it is to see the Camel Caravan rolling along in grand style once again!”

“Dan Gabel has put together an orchestra of which I’m sure Vaughn himself would be pleased. The Moonmaids and dancers complete the illusion that we’ve gone back in time. I hope that sometime soon I will have the opportunity to sit in the theater, close my eyes and drift back to those wonderful days of long ago.”

“Seeing and hearing the new Vaughn Monroe Show...wow! It is just great! The show captured the ‘feel’ of the 1940s for me. Dan Gabel sang, hosted, and slipped into the trombone section in the same casual way Vaughn used to. It all was a bit of the ‘way we were,’ and so much nostalgia for me. Dan Gabel has certainly provided the honest, likeable, singable, and danceable music of the big band era. This show will be a big thrill to people of all ages.”

“I’ll never forget the musicians in that band and the Moon Maids. I listen to [the new Monroe Show] recording now and I smile ear to ear…”

“The show was everything I could have wished for. The band was fantastic, playing those amazing charts, the vocals, the TV ads...everything was right on the mark. The use of Vaughn’s voice on Ballerina was stroke of genius. I also appreciated the dancers. They reminded me how much fun it was to Jitterbug! I can certainly see your respect and admiration for Mr. Vaughn Monroe. Thank you so much for the hard work and determination that you put into this venture.”